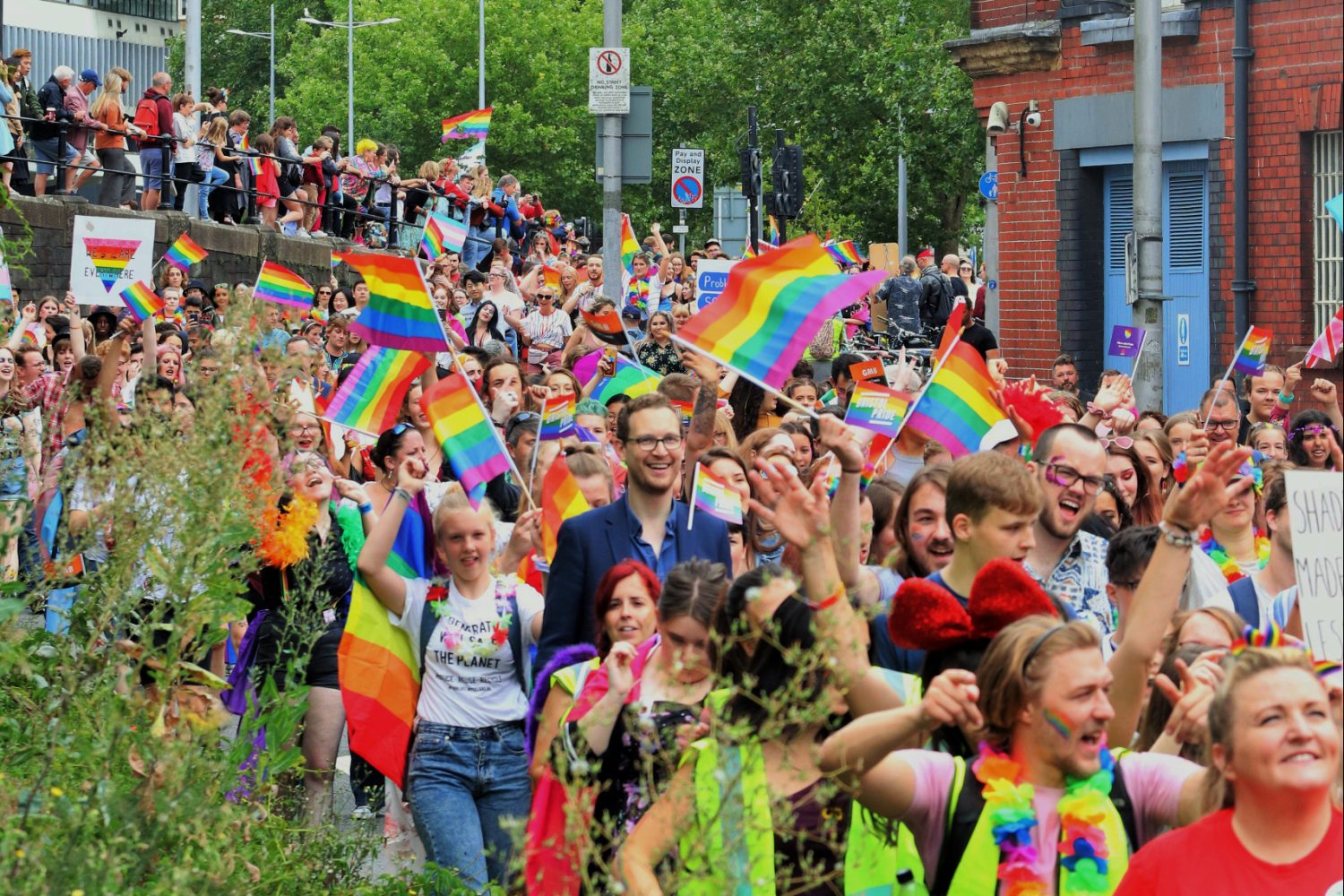 The annual Parade will make an exciting return this year and fill the city with colour.

After a 2 year break caused by the pandemic, we’re thrilled to announce the annual parade march will return this year.

Taking place on Pride Day on Saturday 9 July, ahead of the festival on The Downs, The Parade, which saw 18,000 people take part in 2019, will gather in Castle Park before making its way through the city centre and onwards to the harbourside.

This year’s march will be incredibly poignant, not only is it the chance to bring the community back together but it also marks the 50th anniversary of the first Pride march to take place in the UK. As discussions continue on a full ban on conversion therapy and as the government reviews the human rights act it’s also the opportunity to remember that while progress has been made the LGBT+ community still have to keep fighting for equal rights, for all, and to ensure that hard-fought rights are not only maintained but furthered.

As well as a protest for equality and inclusion, the march is an opportunity for people to come together to celebrate proudly and for members of the community to realise they are not alone. The parade is a clear message that hatred and prejudice have no place in our city.

The Parade is free for members of the public to take part in with a small booking fee for businesses to register and showcase their support by marching on the day. Further details on the route, timings and  how businesses can register to take part can be found on Parade page.

Pride Day on The Downs will feature multiple stages and will attract some of the biggest names in live music and entertainment. Artists already announced for Pride Day include RuPaul’s Drag Race Canada winner Priyanka, Katrina of The Waves, HYYTS and Bright Light Bright Light.  Scissor Sister’s Ana Matronic will headline the official Bristol Pride Afterparty at the O2 Academy.

The beating heart of the festival is the Pride Community tent which will showcase over 60 LGBT+ organisations ranging from charities, support services and sports and social groups. The space will feature alongside the Pride Circus Tent, Youth and Family areas, plus much more.

Pride Day supporter wristbands are available now from £7 with various benefits including free bus travel on Pride Day with First Bus as well as a dedicated shuttle service running from the end of the Parade to The Downs.

‘We are so excited for the march to be making its return this year. The pandemic has been an incredibly isolating time for many and during this time we have seen an increase in hate crime and now a watered-down ban on conversion therapy further dividing the community.

It feels even more important than ever to be able to bring the community back together to celebrate and protest.  We mark the 50th Anniversary of the first Pride march in the UK and LGBT+ rights are still being fought for,  not only does the march serve as a reminder of that but it also gives the community the visibility to say, loudly and proudly we are here and we’re not going anywhere.’

To support the costs of making the parade happen Bristol Pride is again supported by Dyson as the 2022 Parade Partner:

“At Dyson, we believe that being different and authentic helps us to pioneer together – this is what makes our technology so unique. Our global aspiration is that no matter where you are in the world when you interact with Dyson — our technology, applications, retail stores and people— Diversity and Inclusion is always at the forefront.

We’re proud to celebrate the LGBTQ+ community and its allies, and we support Bristol Pride as this year’s Parade Partner for the third year running. It is hoped this continued effort will help raise the visibility of LGBTQ+ persons in the workplace and celebrate their achievements.”