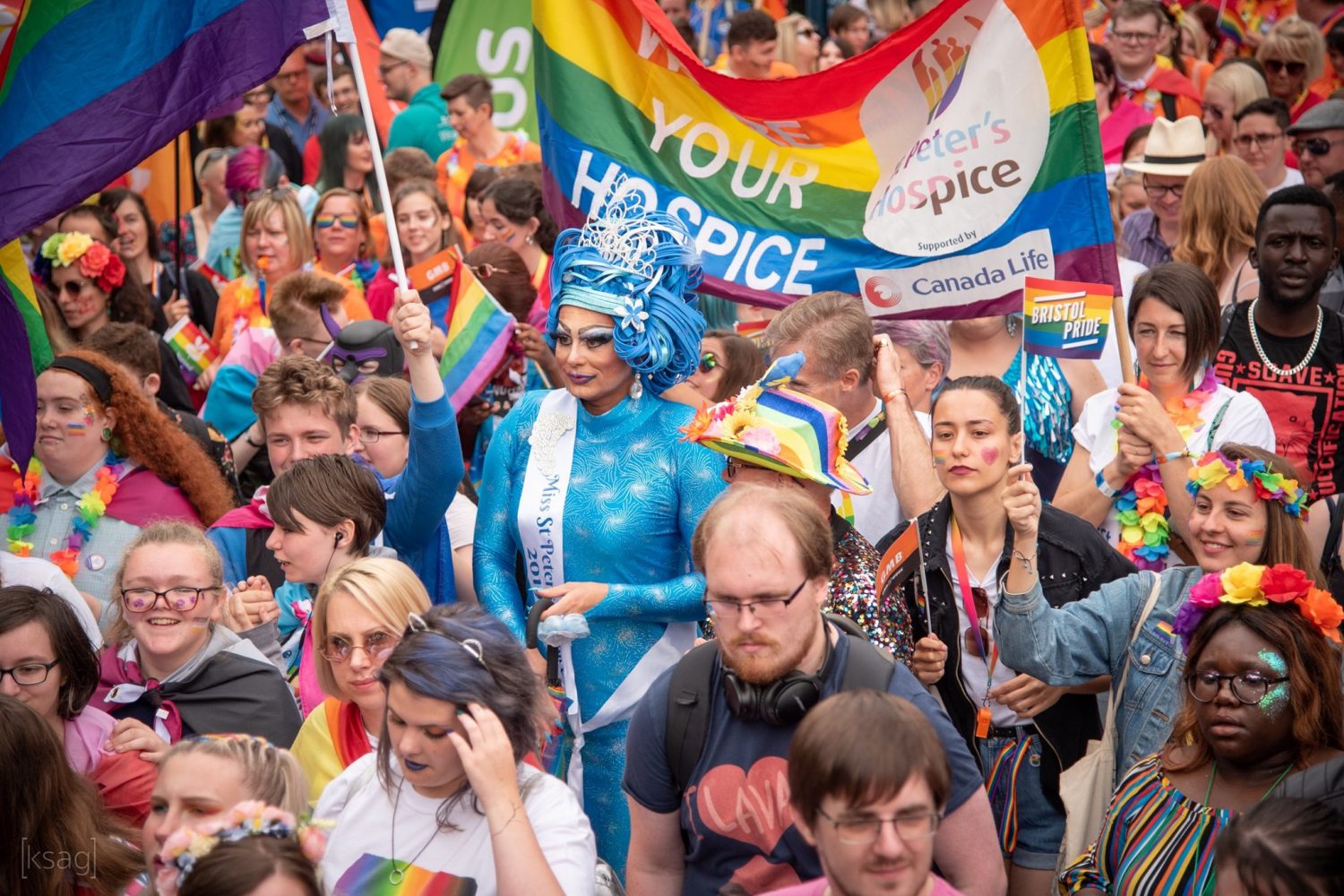 Running throughout July, incredible art will be on display across the city by LGBT+ artists from around Bristol, who have been brought together to present their art for you to view and enjoy.

Organised by photographers Keir Gravil and Karen Freer, who developed the idea of an Arts Trail for Pride, artists and venues have kindly come together to create space to display photos, illustrations, prints and mosaics.

There is no need to walk into venues in order to see some amazing artwork, and there are a variety of places to get out and about and enjoy some fresh air. Please ensure you follow all the latest government guidance on social distancing and be mindful of others around you.

Each exhibit is associated with a charity – if you want to donate to the charity simply scan the QR code on the exhibit card to be taken to their donation page. After a difficult year for many, LGBT+ charities can do with all the support we can give to help them continue their good work.

If you would like to buy any art, you can contact the artists directly using the details in the guide or on the exhibition card.

Listen To The Playlist While You Walk

Mark Small
Mark is a Bristol-based photographer and likes Bristol and photography. Mark mostly takes photos of interesting buildings and wants to get better at photographing people.

Dave Hall
Dave Hall is print-maker based in Bristol. His work is based on linoneum printing and screen printing and is influenced by his training as a graphic designer. Dave’s designs are always bright and graphic and feature print blocks of shapes repeated over and over again in a spectrum of colours like a spirograph. The subject matter is always recognisable but the treatment of the images is unexpected and interesting so that each viewer finds a different meaning behind it.

Matthew Price
Matthew Price is an artist practising in a wide range of disciplines; photography, illustration, mixed-media painting and, more recently, paper collage. His main inspirations are the natural world and his home town of Bristol. After studying for a ceramics degree at Bower Ashton UWE, Matthew shifted his focus to photography and more recently collage. One of his designs features on the Bristol Pound.

Hattie
Hattie is a textile and soft sculpture artist from Bristol. Their work focuses on the human body and stitching together a anatomical representation of the physical form with the emotional experience and personal meaning the body holds.

Ben Jenner
Ben is an artist from Bristol whose practice includes; printmaking, book arts, visual poetry and performance. His work stems from an interest in the handwritten
mark, and is inspired by asemic writing, rooted in abstract expressionism. These organic compositions allude to a tension of conscious and subconscious mark-making, and allow for understanding to happen across all linguistic meaning.

Tom Barker
Tom is a circus artist, artist/performer and performance artist. They have spent years creating space for whimsy on stage but now they are traversing mediums to create whimsy on different scales. Even since moving to Bristol six years ago they have formed a growing connection to it, including it’s geography and it’s history (not to mention its history in brick!)

Adam Cockle
Adam is an NHS administrator living in Bristol. He is passionate about all things food, from cooking to eating to food photography and now, food illustration.

Susannah McDougall
Suze is a Gloucestershire born artist who has just recently moved to Bristol. She enjoys exploring different mediums of art, and specialises in painting, drawing, sculpture whilst dabbling in a little bit of everything. Suze particularly enjoys working with bright colours and expressing her hobbies and interests through the work she
creates. She sells her work online and loves creating special commissions for anyone who’ll throw a crazy or exciting idea her way.

Duncan Tattersall
Duncan is an artist and designer living and working in Bristol. A lifetime passion for historic buildings has informed his work for many years, more recently combining with a background in fashion and textiles to see him embrace the medium of screen print. Since 2018 he has collaborated with buildings preservation charity The Landmark Trust designing and producing bespoke fabrics for curtains in their restoration projects, including a 600 year old medieval hall house in Wales and a Gothic Revival dairy in Kent.

Lisa Rose
Lisa Rose is a pasta-based human originally from Italy, now living in Bristol.
Her illustrations are inspired by female and queer experiences, bodies, sexuality, and intimacy. She focuses on creating more realistic representations of people, especially women and marginalised genders.

Leo Hynett
Leo is a Bristol based artist and writer. He mostly works in inks but recently branched out into acrylics and is now often covered in paint. He’s working on a science fiction novel and is a journalist at Distilled Post.

Matthew Fitzsimons
I’m a painter originally from Northampton (via London) who focuses on the surreal and the oxymoron. The opposite and the completely unrelated always makes for some pretty interesting pieces. It also helps add humour to art, as I don’t believe we have enough of that. As my work developed I learned not to take myself too seriously, as the joy of creation is joy itself.

Aliyah Owens
Aliyahgator is a mosaic artist living in portishead . I use a variety of different materials in my mosaics including glass, ceramics, broken crockery and found materials. I am interested in making mosaics about animals and the natural world, but also creating characters which tell stories. I run lgbt friendly mosaic classes… details available on my website

Scott Hamilton
Scott is a photographer living in Bristol, having moved from London in 2019. He specialises in portraiture and live gig photography. His photography has been exhibited in several galleries including London and Sweden, whilst the Guild Hall gallery in London hosts Scott’s work in their permanent collection.

His work has also featured in Mascular Magazine and the London gay guide Boyz Magazine. In 2018 he won the ‘Love In London’ competition, resulting in his work being displayed throughout London and the Underground. He went on to be featured in many gay publications worldwide. Scott’s photography is also featured in the Portrait of Britain Book Volume 2, and was made one of the finalists having his work displayed on smart boards all over the country.

Colleen Brewer
Colleen is originally from Essex and currently lives in Bristol with her wife, two guinea pigs and many many plants. Inspired by animals and nature, she draws with ink
on paper.

Colleen has had previous exhibitions in London and Bristol. She was shortlisted for the Jerwood Drawing Prize and Longlisted for the wildlife artist of the Year Award.

Karen Freer
Karen is living in Bristol who specialises in film photography. Last year she founded LGBTQ+ Faces of Bristol which sees her taking portraits of queer people all around Bristol.

Header image with thanks to Keir Gravil